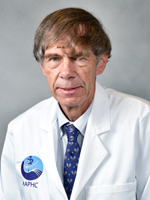 Bernard Scoggins was born in Dalton, Georgia but has been in Albany since 1979 when he joined Albany Area Primary Health Care, Inc. (a Community Health Center) as an Internist. He is still a practicing internist with AAPHC, Inc. and has served as Medical Director for this organization since 1993. Dr. Scoggins is Board certified in Internal Medicine and Geriatrics. He sees patients in the inpatient, outpatient, and nursing home settings. Dr. Scoggins graduated from Duke University in 1976 and completed his residency in Internal Medicine at Emory University in 1979.

Dr. Scoggins has a great interest in medical missions work and has been on many mission trips to various areas of the country throughout the years. He has gone to Karokonam, India on an almost yearly basis since 1986. He has served various roles throughout the years on hospital committees and as medical staff president at Phoebe Putney Memorial Hospital as well as service to various other community organizations. Currently, Dr. Scoggins is President of the Dougherty County Health Department Board of Directors. He is a member of the Phoebe Putney Memorial Hospital Board and serves as current Chairman of the Ethics Advisory Committee.