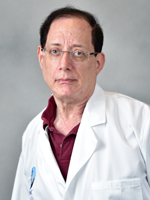 Dr. Phillip Poulos is originally from New York but joined AAPHC in 1981 through the US Public Services Administration. He completed his two year commitment term and then was employed by AAPHC directly. Dr. Poulos graduated from Tufts University (Summa Cum Laude) in 1974 with a BS in chemical engineering. He received his medical degree from the University of Miami in 1978. His residency in internal medicine was completed at University of Connecticut Affiliated Hospitals in 1981. Dr. Poulos has an affinity for Apple products (Macintosh Computers specifically) and has a direct interest in computer applications in primary care medicine. Dr. Poulos is also certified by the American Board of Internal Medicine. In his spare time, Dr. Poulos enjoys physical activity through bicycling, swimming, and weight exercises.